Report from #FreeThemAllCaravan in Kingston

On Sunday, April 19 EPIC and allies took up the call from Solidarity Across Borders for coast-to-coast caravans against imprisonment and for status for all. The tactic of vehicle demonstrations has emerged in the context of the COVID-19 pandemic, which allows us to be loud and visible without physically gathering and unnecessarily risking virus transmission.

About a dozen vehicles met up at a large parking lot in the centre of Kingston, many of them decorated with signage. From there, we drove to the minimum unit of Collins Bay Penitentiary where prisoners recently forwarded a petition for their release. We proceeded to make a very loud cacophony of car horns, air horns, megaphone sirens and a sound system to show our support for the prisoners inside. It was heartwarming to yell back and forth with a few prisoners milling about outside and through the windows, some of whom thanked us for our support. Most importantly, we were definitely seen and heard by the prisoners inside, which was our main objective.

After about 15 minutes, we proceeded to leave. A majority of the caravan was briefly detained on the way out by correctional security and Kingston Police, who blocked the exit. Drivers had to give ID, license plates and passengers were photographed, and trespassing warnings were given to most drivers. As the minimum unit is fairly deep on the prison grounds, this was not entirely unexpected.

This action was planned on short notice and using a new tactic for us. Vehicle demonstrations are tricky to coordinate and we’re learning how to do better. Our lineup was separated once by traffic lights (a planning error on our part), and twice by guards. Most participants spent time debriefing over videoconference Sunday evening, and discussed driving and communication tactics that could be improved in the future.

Thanks to everyone who participated or supported, know that your sounds were heard by those inside, and we’re not going to let up until we are all free! 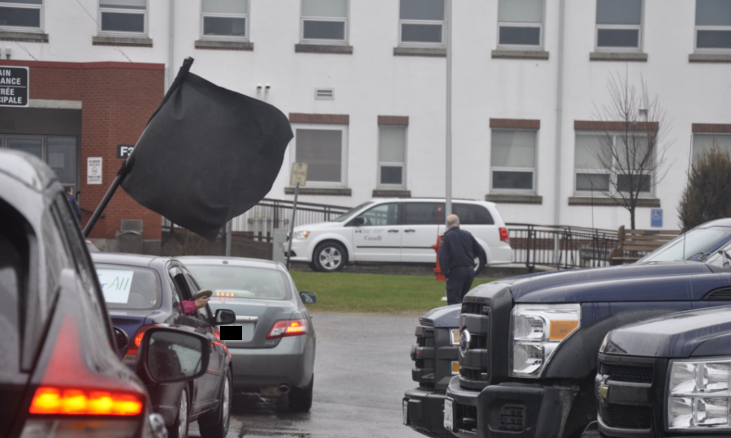 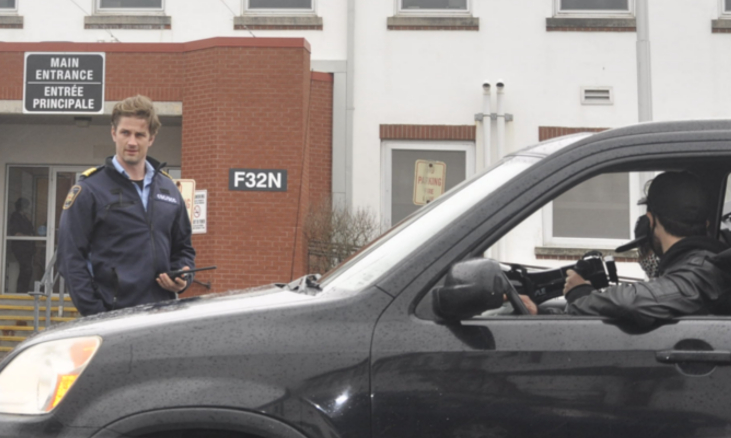 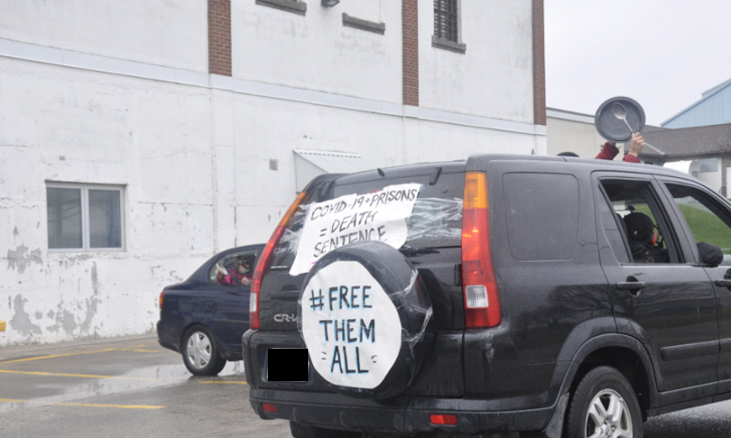 Text of the speech delivered at the prison:

Today, we are here answering the call put out by Solidarity Across Borders and joining in the caravans taking place across the country to add our voices to the growing call for the release of prisoners and detainees, and status for all.

We are also here to add our voices to yours, as we read about your petition for release and the conditions y’all are facing inside, and the knowledge of this is part of what brings us to act. We hear you. Please keep speaking out.

We know that so-called “correctional” institutions and detention centres in Canada are disasters waiting to happen. And while suspending visits and limiting programs further isolates prisoners from community supports, it does nothing to address the risks posed by the crowded conditions, the lack of cleaning and hygiene supplies, or by the staff coming in and out of these places.

We are given hope and inspired by the immigration detainees in Laval who were released after going on hunger strike, who maintain ongoing pressure to release the folks still held there, and also by news that as of Tuesday, Derrick Snow will be the first federal prisoner released due to the COVID crisis after pushing for his release in the courts, on the grounds of the increased risk he is in due to other health problems.

We have already seen outbreaks in prisons across the country, and on April 15 the first COVID-related death in custody happened in Mission, BC. Outbreaks haven’t reached prisons in Kingston yet, but we all know it’s only a matter of time.

We do not want you to die in there. Keep pushing and speaking out, and we will too.